I was trying to figure out what the best way would be to transport several of my begonias on my over one and a half hour car ride into Boston for the 2013 Boston Flower Show.  I live over 65 miles from Boston, and these plants were being entered in a juried show where every little imperfection could cost you a ribbon.

I primarily have plants growing in terrariums that have been made up of two PETE plastic party/chip bowls whose tops are crimped shut with cheap Dollar store hair clips.  These tend to travel well as any swaying they encounter will cause the entire gravel/charcoal/soiless mix and plants to rock on the round bottom bowls and I can easily center these just prior to handing them over for a show.

The other plants grown in pots I worried about taking them for a car ride the most.  Most all of the pots I use are plastic 4 inches and 6 inches in diameter, and I also have a handful of odd-sized clay pots I use to hold down top-heavy begonias. These top-heavy begonias typically seem to have branches that are prone to breaking if bumped, never mind if they were to tip over!  This could be a potential catastrophe for plants that have been lovingly grown and are in peak perfection heading for a show. Keeping all plants stable over quick braking/sudden stops, going over bumps, and rounding sharp corners I considered big problems.

Other problems had to do with not using too big a container to put them in that I by my self cannot carry from however far away I have to park to wherever I have to drop off my plants (though my husband has been recruited on numerous occasions to help me).  So too much weight or too big a container that could prove unwieldy were issues as well.

​After much trial and error, I found that wine, liquor, book or Bankers' boxes seem to be the best fit, plus, they sometimes also have built-in handles making them even easier to pick up and carry around. 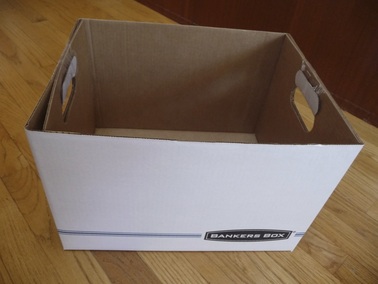 I could have used plastic crates, but to prevent the plant pots from tipping while inside the box and the plant smashing and ultimately breaking leaves and branches against the box sides, I found that making holes into cardboard food packaging boxes and then taping these boxes inside the Bankers' boxes did the job!   Someone at our begonia society mentioned they saw someone at one of the shows with boxes within boxes to hold their plants, and this confirmed my findings!
I tried to find food packing boxes that were tall enough to match 60-80% of the pot's height using pasta boxes, tissue boxes, granola boxes, small snack boxes and such.

I placed the pot I was going to put inside the box on the top of the food box and traced the bottom of the pot onto the box with a pencil or marker.  If the plant is asymmetrical, you might want to not place it on center, but to the left (or right) of center to protect any branches that are off to the side.

Then I took an Xacto knife and starting from the edge of the drawn ring, made slits in the box radiating in like spokes into the center like a wheel.  I started my cuts just slightly (1/4 inch) past the line drawn, as most pots have a smaller bottom diameter than top.

I then pushed the pot into the box to make the hole bigger and to custom fit that particular pot to that box.  Great use of recycling materials!
The plant should sit nice and snug and if the cardboard is too flimsy and you think might not hold the pot in a sudden bump or braking situation, pick another food box to use instead. 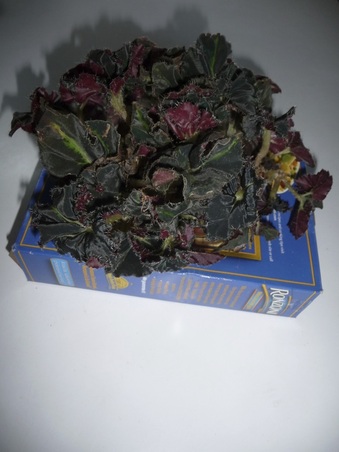 The food package boxes were spaced inside the bigger carrying box (Bankers Box) to determine if the plants they were going to hold would all fit properly inside that big box.  Once the slits were made in the food boxes and the pots were fitted to their respective boxes, these were taped with strong clear packing tape inside the big Bankers Box, in the exact placement that allowed the plants to sit together.

The beauty of using the Bankers boxes was that a whole bunch could be stacked along side each other keeping everything from sliding in the back of the SUV.  Though branches stuck out from the boxes, the fact that the walls of the boxes were touching and not allowing motion, and that the plant pots were stable, all was well and the long car ride was much less nerve-racking!

For the next show, I think I will mark each food box with a number that I will also put on the bottom of the plant pot so that upon picking up the plants after the show, I don't have to remember what box each plant should go in.