Begonias at the 2017 philadelphia flower show

begonias at the 2017 philadelphia flower show

​The Philadelphia Flower Show, largest indoor show in the world, has an amateur horticulture competition with thousands of entries.  Plants are displayed in the 20,000-square foot Hamilton Horticourt. This beautifully designed space opened in 2013 and was made possible by a one- million-dollar gift from PHS member and exhibitor Dorrance Hamilton.  Entries are judged and removed three times. Begonias were judged on March 10, 13 and 16.  Three different panels judged approximately 20 classes on each day of judging.  In addition to begonia classes the panel also viewed begonias entered in other classes: Hanging Containers, Grand Old Plants, Beginner’s Luck and Plants Grown in House.  I estimate that 400-500 begonias were exhibited during the 9-day show.  The show relies on approximately 3,000 volunteers, including almost 300 judges.  It was, also, great to see Art Scarpa and other members of the Cactus and Succulent Society of Massachusetts at the judge’s breakfast.

I was fortunate to join Charles Jaros, ABS Judging Chair and Chris Murray GCA judge on the third day of judging.  We judged 19 classes with close to 100 entries. In addition to awarding 1st, 2nd,3rd and honorable mention ribbons our team was tasked with awarding the Susie Walker Award to the best in the Begonia classes.  The Delaware Valley Branch of the American Begonia Society (DVB) asked the panel to award two ribbons for best flowering begonia, and two ribbons for best foliage begonia.  The DVB award, new this year, was quite lovely; if they had an award for most attractive rosette, it would go to them.  PHS classification and point scoring are unique to the show and easy to use.

Perfectly grown species and hybrids included: B. soli-mutata and B. subvillosa  B. ‘Marmaduke’ was the most frequent entry on Thursday; with six plants, some in bloom, some not and a wide variety of leaf color.  A visit to this show should be on everyone’s bucket-list. 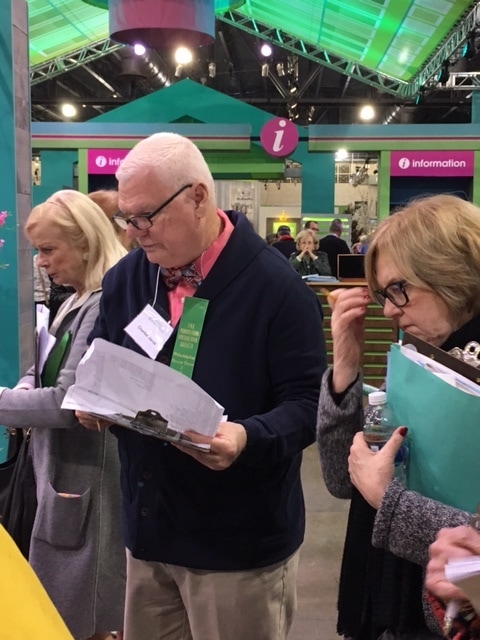