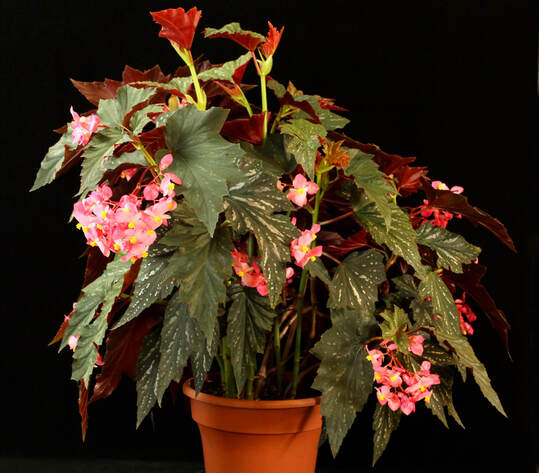 Begonia 'Lana' one of the Cane Begonia Winners during the Annual 2018 Buxton Plant Show and Sale.
Cane begonias rarely need staking, unless they are getting leggy from lack of bright light.  In early Spring, right before they kick off their growing season, this is a good time to remove old, woody canes, or canes that cannot stand on their own, and to reduce the height of the plant overall.
​
New canes just starting out from the soil should be left alone.

At this time, if you think the plant canes in the pot might be overcrowded, you may consider repotting into a just slightly larger clay pot or other pot that is heavy enough to prevent the plant from tipping over due to the potential height of the plant.

Cane-like begonias rarely branch out laterally above soil level, but some may be encouraged by trimming just above a node, to get the node to set side or multiple branches causing the plant to get bushier.

If your plant has new canes that are now leggy or need staking because they cannot stand on their own, are towering above the others, and failed to develop many leaves, you may want to remove those as well.

Also, remove old, brown canes with little to no leaves, cutting them to the ground or surface of the container.

Some people cut back their overall plants up to a maximum of two thirds the length of the canes with success.

During the growing season, pinch the growing tips to keep canes from getting too tall. This tip pinching will promote growth of new canes from the soil base.
​
The easiest and most reliable method of propagating cane-type begonias is from stem cuttings. Take a tip cutting with two to four nodes on it. Make sure your scissors have been sterilized by dipping them in alcohol and drying them before use. Dip the cut end of the tip cutting in rooting hormone, and plant it in a rooting medium such as perlite or sand that is kept moist, or, put the cutting in water as soon as possible, and wait for it to root out, and soon you will have a whole new plant.